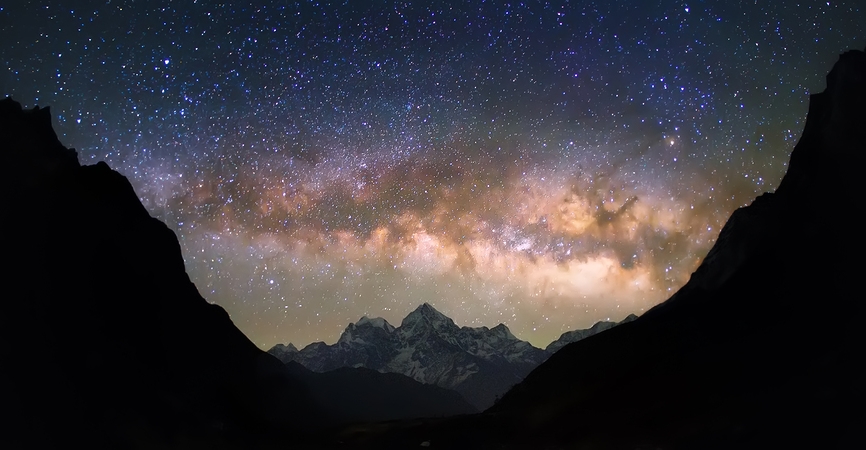 To make sure everything is set up for a Milky Way photoshoot you need to know a lot of things besides just what aperture to use.

This article thoroughly explains all the necessary arrangements. When is the best time to take the shot, or where? Have you considered safety issues? Be prepared and the rest will almost take care of itself!

WHEN TO SEE THE MILKY WAY

After learning in what direction the Milky Way will be visible, it’s time to figure out shooting locations where you can incorporate the Milky Way into your image.  While it’s exciting to see the Milky Way pop up on the back of your camera, the Milky Way is going to look the same every time you take a photo of it, so it’s the addition of a terrestrial landscape that makes the photo something unique.  Photography platforms such as Instagram and 500px can be extremely helpful to spawn ideas for locations to shoot, but mapping tools like Google Earth will be what shows you if the viewpoint you’ve been eyeing will face in the right direction.  This type of planning is where PhotoPills and PIFP really shine because they use mapping features to tell you exactly when the Milky Way will line up with your intended shot.

Since I live in an urban area, I have to drive a minimum of two hours to reach a truly dark location where I can shoot the Milky Way.  For that reason, I always have location scouting in the back of my mind, and I consider during my daytime drives through the mountains or along the coast whether a scene could be a possible candidate for a Milky Way photo.  If ever I think that it may be at a potential winning location, I pull out the compass I keep in my car to orient myself, snap a few photos so that I can reference the scene later, and take a look around to determine how easy or difficult it would be to access the location at night.  With this information already gathered, setting up a photo when I arrive on location after dark becomes significantly easier.

This may seem like an odd tip, but I normally try to contact whoever owns or operates the land to which I’m traveling to take a Milky Way shot.  Since I live in an urban area, I’m typically driving between two and four hours to reach my shooting location, so if I’m going to end up finding a locked gate at the end of that trip, I want to know about it before I leave my house.

While contacting the land owner or operator before traveling can potentially be a benefit by helping to avoid possible trespassing, it’s also directly beneficial to your photography.  By placing a simple phone call before leaving home, I’ve been able to get tips on spots I had never visited before, ensure nearby lights would be turned off to keep the location darker, avoid locations that were no longer accessible, and make connections with land owners who were later interested in sharing and purchasing my photography.  Every person you interact with has the potential to be a valuable resource when it comes to furthering your photography, so a simple phone call is worth your time.  And most importantly, in all the times I’ve called and asked permission to shoot at a location, I’ve never been turned down.

The need to be safe can’t be overstated in landscape photography, especially at night where you’re more likely to be injured and less likely to come across help when you need it.  When one twisted ankle or slip and fall can be the difference between making it home or not, it’s important to air on the side of caution when out shooting at night.  The best case scenario is not to go out shooting alone, but since not everyone has friends or family willing to wreck their sleep schedule in the name of astrophotography, this isn’t always possible.  Do you best to take common sense steps to inform friends and family of what your plans are, and don’t test your limits.  It’s great to get a unique photo, but pushing too hard and risking injury or death just isn’t worth the shot.  Bring along a first aid kit and be familiar with how to use it.

In addition to staying safe during the shoot, make sure not to test your limits when it comes to traveling either.  I’ve had nights out shooting the Milky Way where I feel like I go from wide awake to incoherently exhausted within minutes, and if it happens while I’m on the road driving home, I could be in serious trouble.  If you have any question about whether or not you can make it home in one piece, take a nap and recharge before heading home.

Below is my standard packing list when getting ready for a Milky Way shoot:

In general, the size of the pixels on a camera sensor is related to how noisy a resulting photo will be that is captured on that sensor.  Smaller sensors such as cell phones, micro four-thirds, and crop sensor bodies generally don’t perform as well in low light situations as full frame cameras do, meaning that a full frame is the best choice for producing a clean photo.  It’s important to keep in mind, however, that it’s possible to work around this rule by image stacking, which can increase the signal-to-noise ratio in the image and produce a cleaner photo, meaning it’s even possible these days to capture respectable Milky Way photos with a cell phone.

While sharpness of a lens is important, how a lens handles aberrations can have an even more noticeable effect on your Milky Way photo, because night photography often tests the limits of our gear and shows off its imperfections.  There are many types of lens aberration, but when it comes to wide angle astrophotography, the most noticeable ones are chromatic aberration and sagittal astigmatism, which is often incorrectly referred to as “coma” (something I’ve definitely been guilty of).

A good lens for Milky Way photography is one with a fast maximum aperture.  Common ultra wide angle Milky Way focal lengths are anywhere from 14mm to 18mm on a full frame camera, which tend to be accompanied by a maximum aperture of f/2.8.  Tighter focal lengths such as 20mm, 24mm, 35mm, and 50mm, tend to be available with maximum apertures of f/1.8 or even f/1.4.  These wide apertures are important because they let in enough light that ISO and shutter speeds can be minimized, which leads to less noise in an image and less streaking of stars, respectively.  Lastly, don’t be afraid to go for a fully manual lens when shooting the Milky Way since you most likely won’t be able to reliably autofocus at night anyway.  Below is a list of a few lenses commonly used for Milky Way photography, although it’s far from a complete list: