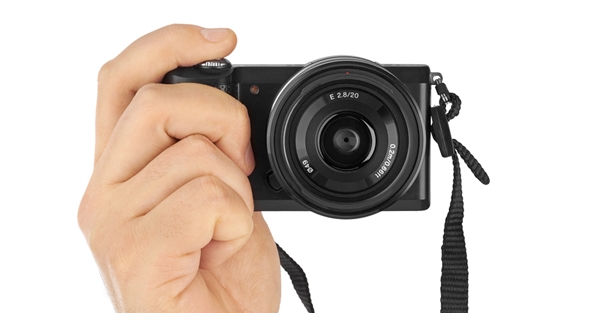 There’s a great article over at PhotographyLife about this subject.

They’ve also compared mirrorless cameras and DSLRs – especially their weights and sizes. I must say I had been thinking about getting a mirrorless camera for travel photography just because I’m tired of carrying the heavy gear around. But maybe I should be looking for a lighter DSLR instead…

I believe the actual weight savings of mirrorless cameras over traditional DSLRS are somewhat exaggerated in the press. To hear some talk, you would think that every mirrorless lens weighs but small fraction of its DSLR equivalent, and that the traditional 30lb DSLR backpack you take on your mountainous vacations will eventually be reduced to the weight of a few pieces of fruit, and fit in a fanny pack once you switch to a mirrorless system. Ok, I am exaggerating a bit, but not by much. There are indeed reasons to be excited about mirrorless cameras and the potential of this technology, but I would suggest that size and weight should not be at the top of this list.

I decided to compare a Sony A7II Body to a Nikon D750 Body as well put a variety of lenses on the scale, in a humble attempt to add some perspective to the mirrorless hype. This article is not meant to represent a head-to-head comparison of both cameras across the full range of features and functionality.

In the Great Race to save weight and size, I believe the mirrorless manufacturers may have sacrificed some handling characteristics for a fairly substantial portion of the population. With the changes Sony made to expand the grip size of the A7II, it seems to have gotten the message that smaller grip sizes may negatively impact overall comfort and feel. In order to address these issues, however, Sony had to add a bit of size and weight to the original A7. The result, of course, was a body that is not that much smaller or lighter than the D750, thus negating what Sony had been stressing as one of its main selling points of the A7 style bodies. Surprisingly, there were no ads claiming, “After touting the smaller size of our A7 full frame mirrorless camera, guess what? We made it bigger and heavier!” Even with the improved grip, however, the A7II may be a bit small for some to comfortably hold, particularly with a longer lens attached.

If I had a word of advice for Nikon or Canon (they haven’t been calling for a while now…), when they finally jump into the DX and FX market with mirrorless entries, I would suggest making them closer to the DX body size (height) than the current Sony A7II. Do not expect photographers with medium-to-large hands to grip their camera and lens with 2 or 2 ½ fingers. Saving a few ounces of weight at the expense of a comfortable grip is not worth the trade-off. Those of you with smaller hands are likely to disagree with my perspective on this matter.

Total weight difference between the Sony A7II and Nikon D750, taking the battery concerns into account: 112 grams or 4 ounces. To add some context – 112 grams/4 ounces is less than the weight of a banana or my Invicta watch. Not exactly a “revolution” on the weight reduction front. If there is a reason to buy a A7II instead of a Nikon D750, weight doesn’t seem to be it, despite claims to the contrary.

If camera and lens weight are a significant concern for you, your first question should not be “Mirrorless vs. DSLR?” but rather “FX, DX, or other smaller sensor?” Mirrorless lenses are not guaranteed to be any lighter than their DSLR equivalents, despite the many advertisements to the contrary. Simply put, the size of the sensor drives the size of the lens. Given recent advancements in sensor technology, I am hard-pressed to recommend FX (mirrorless or DSLR) to anyone other than the most demanding photographers or those with unlimited funds (I don’t personally know anyone in this latter group, but suspect they are out there). I suggest that anyone looking to buy a new camera system begin by realistically consider their needs, and then price out a few systems in FX, DX, etc. for both DSLR and mirrorless offerings and find the sweet spot between features, costs, and the weight of the system. Simply deciding on an DX rather than an FX system can significantly reduce both weight and costs.

There are no magical properties of mirrorless technology that will result in lenses that are significantly lighter than their DSLR equivalents. Sensor shifting image stabilization technology can alleviate the need to put image stabilization technology in each lens, potentially reducing the size and weight, but this capability is not exclusive to mirrorless cameras. My first DSLR, a Pentax K10D featured this technology in 2007. Camera manufacturers may be able to use a shorter flange on mirrorless lenses due to the proximity of the lens to the sensor. This will save some weight, but is not going to produce any significant results. 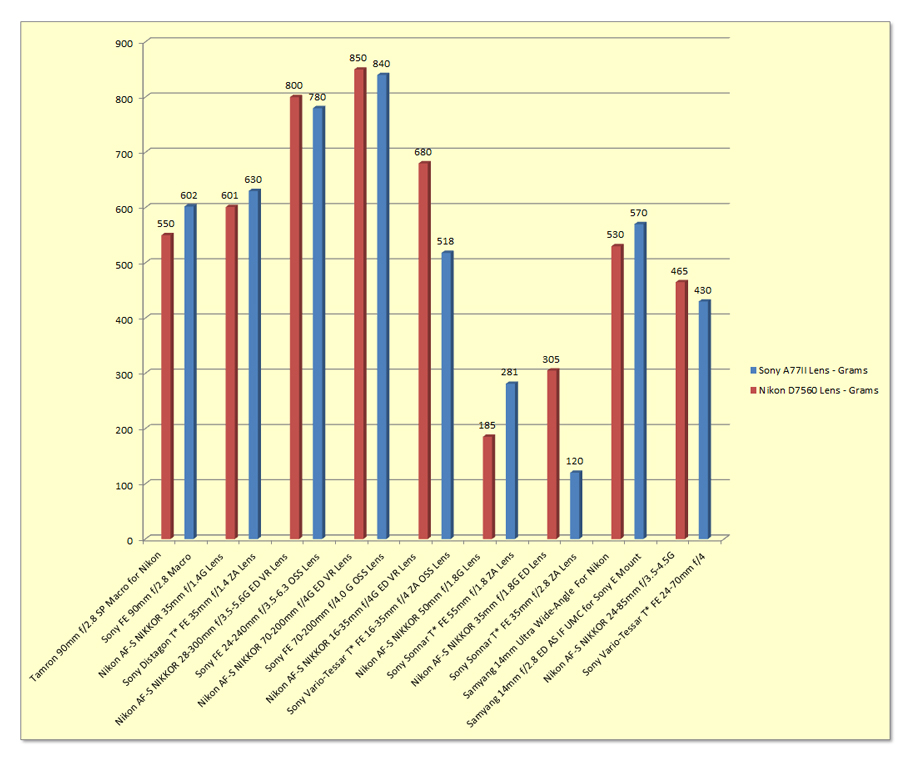 If you loaded all of the lenses listed in two separate bags, their total weight would only vary by a mere 195 grams or 6.9 ounces. To put that in perspective, that is more than the weight of a banana, but not as much as an avocado – for 9 lenses. Let that one sink in a bit before rushing out to trade in your FX DSLR for an FX mirrorless kit.

Mirrorless technology continues to advance at a rapid pace. But much of the hype about weight savings is just that – hype. Don’t be taken in by it. The size of the sensor, not whether the camera has a mirror, is the primary driver with respect to the size and weight of the lenses. If weight is a critical concern, take a hard look at the type of systems you can build around each of the sensor sizes – FX, DX, and smaller, relative to cost, quality, and weight. Immediately cross FX off the list unless you never intend to shoot with anything other a 20mm to 50mm prime f/1.8 lens. Mirrorless prices are coming down overall, but they still tend to command a premium over their DSLR counterparts. I would give the edge to DSLRs over mirrorless offerings for now, primarily in consideration of value, features, and lens availability, but DSLR’s advantages are quickly being eroded. While you may find a few mirrorless cameras and lenses that are a few ounces lighter than their DSLR brethren, there is no free lunch – the lens must cover the sensor in the camera – and that means a minimal amount of glass, plastic, metal, and electronics per given sensor size.

Read the full article over at PhotographyLife.

The thing that puts me off mirrorless cameras is that you have to hold the camera out in front to view the screen, which is often difficult to see clearly in bright sunlight. Give me a DSLR any day that has a clear viewfinder and can be held close to the face giving a much steadier support for the camera. OK I’m old fashioned but sometimes more modern ideas aren’t always better.