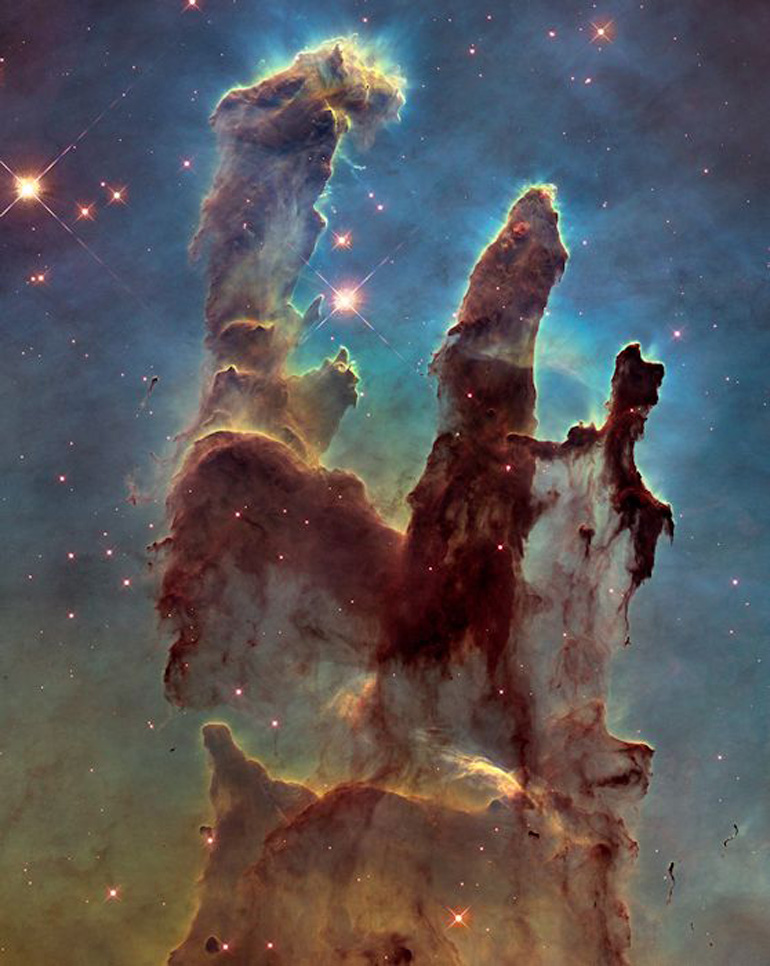 The Hubble telescope is in orbit around the earth. Because it lives in the the space above the atmosphere it gets a view of the universe that ground-based telescopes cannot achieve.

Jan. 7, 2015: Although NASA’s Hubble Space Telescope has taken many breathtaking images of the universe, one snapshot stands out from the rest: the iconic view of the so-called “Pillars of Creation.” The jaw-dropping photo, taken in 1995, revealed never-before-seen details of three giant columns of cold gas bathed in the scorching ultraviolet light from a cluster of young, massive stars in a small region of the Eagle Nebula, or M16. In celebration of its upcoming 25th anniversary in April, Hubble has revisited the famous pillars, providing astronomers with a sharper and wider view. Although the original image was dubbed the Pillars of Creation, the new image hints that they are also “pillars of destruction.”

Astronomers using NASA’s Hubble Space Telescope have assembled a bigger and sharper photograph of the iconic Eagle Nebula’s “Pillars of Creation”. “I’m impressed by how transitory these structures are,” explains Paul Scowen of Arizona State University in Tempe. “They are actively being ablated away before our very eyes. The ghostly bluish haze around the dense edges of the pillars is material getting heated up and evaporating away into space. We have caught these pillars at a very unique and short-lived moment in their evolution.” Scowen and astronomer Jeff Hester, formerly of Arizona State University, led the original Hubble observations of the Eagle Nebula.

The original 1995 images were taken in visible light. The new image includes near-infrared light as well. The infrared view transforms the pillars into eerie, wispy silhouettes seen against a background of myriad stars. That’s because the infrared light penetrates much of the gas and dust, except for the densest regions of the pillars. Newborn stars can be seen hidden away inside the pillars. The infrared image shows that the very ends of the pillars are dense knots of dust and gas. They shadow the gas below them, keeping the gas cool and creating the long, column-like structures. The material in between the pillars has long since been evaporated away by the ionizing radiation from the central star cluster located above the pillars. Read the rest of the article on NASA’s website Source: NASA Image source: NASA/ESA/Hubble Heritage Team (STScI/AURA)/J. Hester, P. Scowen (Arizona State U.)