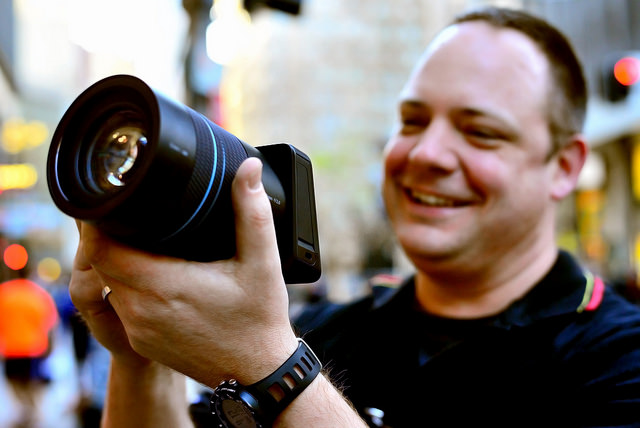 I read this article originally over at the Verge. I have included a portion of that article below. Unlike the little novelty version this is a real honest to goodness camera.

$1499 seems like a lot to spend since I’m sure this technology will continue to develop quickly. However, the camera is designed to be upgradeable via firmware updates instead of having to buy new hardware.

Ten minutes into using the Lytro Illum, I’m throwing out everything I’ve ever learned about photography. Taking great photos with this camera has a different set of rules, a different guiding principle. Forget the rule of thirds; shoot for depth. Frame from below, because it makes everything look more dramatic. And most of all, stop half-pressing the damn shutter and expecting something to happen. Focusing doesn’t matter anymore.

The Illum is Lytro’s second product, but its first real camera. This is what Lytro executives say they’ve been building for seven years. The last one was made to prove light-field photography is real science. This one is a statement that the next phase in photography is already here. The Illum has a remarkable lens, a big, hefty body, and lots of manual controls. It shoots photos that you can refocus later. That you can look at from a number of different perspectives, or view in 3D. Photos that start to answer Lytro’s fundamental question: what becomes possible when we don’t have to print pictures anymore?

The Illum is made to show a certain class of photographers (mostly pros with $1,499 burning a hole in their pockets) a glimpse of the future. Over a week of shooting with it, I did get that glimpse — but that future still feels far away.

There are more complicated and nuanced ways to describe it, but at its core light-field photography is just a more powerful and detailed way of capturing light. Instead of capturing it on a single plane, freezing an image in time and space, a light-field camera also captures the direction in which light was moving. Its processor then essentially renders a 3D scene, complete with the knowledge of distance between objects. A light-field photo represents not only everything in the scene, but a spatial understanding of the things in it.

Armed with all that data, Lytro’s core innovation was to offer a way to refocus your photo after it’s been shot. Over time, Lytro also added the ability to subtly shift perspective on an image, as if you’re moving your head around slightly. It gives photos a certain depth, an immersiveness that is a lot of fun to play with. Lytro rolled out 3D processing, too, and has much more planned; everything comes as updates to the software you use to view the photos, so your photos just get better over time. You don’t just look at Lytro’s “living pictures” — you explore them.

Read The Original Article Over At The Verge…